Chuck Yeager, the U.S. test pilot and WWII aviator who broke the sound Barrier in 1947, was on my mind this morning. You see, he was a childhood hero of mine. I was a bit of an aviation fan and have read every book and article I could lay my hands on, on this remarkable individual. As youngsters, we even had playing cards with aviation heroes, which we used to collect and swap between us.

Born on Feb. 13, 1923, in Myra, West Virginia, he was the second of five children of Albert Yeager, a natural-gas driller, and his wife Susie Mae. He grew-up in a small town, learning auto-mechanic skills from his father and spending much of his time fishing and hunting. After a rather uneventful childhood, Chuck enlisted in the U.S. Army Air Corps, first as a mechanic and was selected for pilot training in 1942. After gaining a reputation as a fighter pilot, he returned to the US after the war.

By 1947, The U.S. Air Force had chosen Yeager to pilot an experimental rocket-powered plane, called Bell X-1, in California’s Mojave Desert. The plan was to push closer and closer to the speed of sound – Mach 1, or roughly 1,070 kph, over the course of numerous tests. The gradual approach was deemed necessary to study the shock waves that caused extreme turbulence as the plane would approach supersonic speed. By 14 October 1947, getting ready for his ninth test flight, Yeager was showing clear signs of frustration. At 20,000 feet, his X-1 rocket plane detached from the B-29 bomber that had carried it into the sky. Yeager activated rocket boosters that propelled the ship to 42,000 feet (12,800 meters). With 30% of his fuel still remaining, he activated another booster to reach 0.96 Mach, employing a recently devised technique — adjusting a horizontal stabilizer on the plane’s tail, to counter the shock wave building up there. And here is where the story gets interesting…

He noticed that the faster he flew, the smoother the ride became. At some point, the Mach needle began to fluctuate. It went up to 0.965 Mach and then tipped right off the scale. He thought he was just seeing things. But in reality, measurements showed he had reached Mach 1.06. The sonic boom that accompanied the breakthrough notified the crew on the ground that Yeager had made history. He later noted “I was thunderstruck – after all the anxiety, breaking the sound barrier turned out to be a perfectly paved speedway.”

I suppose there is a lesson here for all those seeking to set a record, to go beyond convention and perhaps even defy the powers that be…expecting turbulence, escalating uncertainty and possible disaster, as we deliberately inch our way closer to what seems an unbroken barrier, we find a new and quiet space, where our instruments of the past can no longer tell us where we are, where the barrier is within sight, and before we know it, we find ourselves stepping across the once-thought impossible, into new possibilities.

Chuck was considered the greatest test pilot ever by many of his contemporaries and played an important role in what became known as the ‘Golden Age’ of aviation. He went on to head the US Air Force’s Aerospace Research Pilot School, which would train more than 25 astronauts who participated in the Gemini, Apollo and Space Shuttle programs. He supported aviation education through a charitable foundation and he served on the presidential commission that investigated the 1986 explosion of the Space Shuttle Challenger.

Having lived an “incredible life well lived”, at the age of 97, Chuck Yeager passed away earlier today. Rest in Peace Chuck. You have touched the lives of so many and showed us that barriers were meant to be broken, not in rage but in knowing that, in some way, we are already there, in the stillness, before the moment arrives.

In this special edition of Hidden Growth Champions, we speak with Marc Vlietstra of TTRO, on our work with clients to develop strategic capabilities. As we adapt to new and unfamiliar terrains, the capabilities we need often change. Complex new capability sets come into focus while others no longer offer us a measure of differentiation. Listen to our conversation about how we’ve gone about developing one such capability, at speed and scale.

"I have flown in just about everything, with all kinds of pilots in all parts of the world – British, French, Pakistani, Iranian, Japanese, Chinese – and there wasn’t a dime’s worth of difference between any of them except for one unchanging, certain fact: the best, most skilful pilot has the most experience." 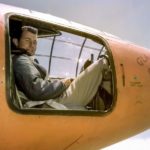